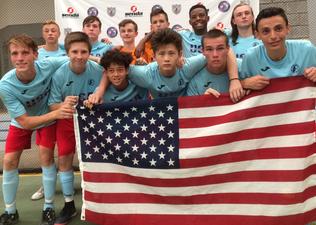 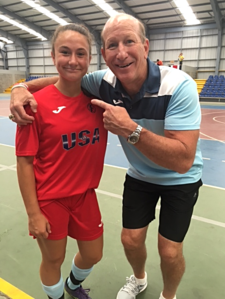 When When the U.S. Youth Futsal National Teams traveled to San Jose, Costa Rica this summer, the Massachusetts Futsal Association was well represented. Of the 72 players who traveled to Central America, five play on teams in the Boston area league.

“This past trip to Costa Rica was very well represented again with Annika, Brooke, Caleb, Fiona and Matthew all playing extremely well for the United States,” said Tozer, Head Coach of the Men's National Futsal Team. “As the growth of futsal continues to explode with more and more players being trained at a high level, those from Massachusetts Futsal are surely some of the best!”

Jurgilewicz, the eldest player on the girls side, was named Player of the Camp at the National Trials. She couldn't believe the news when she received word of her invitation.

“My initial reaction was disbelief, but then of course I was excited,”
Jurgilewicz said. “In Costa Rica, the futsal atmosphere was intense and
competitive; and culturally the experience was awesome!”

Balitskiy, a rising 9th grader at the Boston Latin School, was praised by Orf
for performing admirably despite being one of the youngest members of
his team.

“Matthew was chosen because of his leadership, individual talent and size,”
Orf said. “It was his leadership and maturity playing out of the back that set
him apart during this trip and that bodes well for his growth as a player.”

Haarala, who like Jurgilewicz plays locally with Pink Ladies Futsal Club, said the most memorable aspect of the trip was bonding with her teammates.

“Standing with them before the first game when the national anthem was playing made me proud,” said Haarala, who scored in all three matches in Costa Rica. “The futsal atmosphere was enthusiastic. It's really awesome to be in a building full of people who love the same sport you do, as much as you do.”

Orf believes Haarala has a chance to one day play for an as-yet non-existent
senior women's national team.

“I am looking forward to seeing Brooke in our programs for many years to
come,” he said. “For her sake I hope that a Women's National Futsal Team
is created sometime in the near future.”

For years Hajian – an Arlington resident and member of the U18 national
futsal team – has been a standout player with F.C. Black Knights, where he
trains under the leadership of head coach John Montanaro.

Prendergast, a goalkeeper from Sudbury long of Kings FC, was selected to
play with an older age group based on the potential Orf saw in her this
summer.

“Fiona performed like any coach hopes their keeper will by playing steadily, making the simple saves and then coming up big in the clutch,” said Orf, the former Men's National Team goalkeeper. “If she had any self doubt, those thoughts should now be dispelled. I am very proud of her.”

The U.S. Youth Futsal I.D. National Team program identifies and rewards the very best players in the country, and this summer five of those 72 call Massachusetts home.

Haarala, who also represented the United States in Colombia in 2016, suggests that any player with effort and passion can earn the opportunity to wear red, white and blue abroad.

“If you work hard enough, keep practicing and love futsal you will have that much higher of a chance being on a national team.”

The next cycle of U.S. Youth Futsal I.D. Trials will take place Feb. 9-11, 2018 in Westford, Mass. Massachusetts Futsal leagues commence in November throughout the Boston area.