A two-minute half-time period will occur between halves.

Teams may call one one-minute timeout per half (when in possession of ball, ball out of play).

There is no overtime, injury time or stoppage time.

Teams are comprised of four outfield players and one goalkeeper.

The goalkeeper must wear a different color jersey than the outfield players.

Each team must wear a distinctively colored shirt with a number on the shirt.

No casts or splints are allowed.

Players may not wear eyeglasses. Sport-specific eyewear worn with a strap are okay.

Jewelry, watches, earrings, metal barettes and other dangerous items are not permitted.

There is no slide tackling in futsal (see goalkeeping exception below).

There is no offsides in futsal.

Although some contact is unavoidable, futsal is largely a non-contact sport. In addition such legal contact shall not be careless, reckless or excessive.

All substitutions must take place in front of the team bench -- not at the half-way line.

Teams will not switch benches (and ends) at the beginning of halftime, but will remain at the same bench unless the match official deems a significant advantage defending one half of the pitch.

Intentional heading or attempting to head the futsal ball is not permitted at U11 (2010) and younger. The restart is an indirect free kick.

Kickoffs: are direct. The ball may be played backward.

Goal Clearances: are taken when the ball wholly crosses the goal line after being touched last by the attacking team. The goalkeeper must use his hands to roll, bounce or throw the ball from anywhere inside the penalty area.

Corner Kicks: are direct. The ball must be placed directly on the corner spot and the kick must be taken within 4 seconds.

Free Kicks: may be indirect or direct. The ball must be stopped completely before the kick may be taken.

Distance: For all of the above, except goal clearances, opponents may not be closer to the ball than 16 feet.

Ceiling: If the ball hits the ceiling or other object, the team that did not touch the ball last restarts play with a kickin from the nearest point on the touchline.

Indirect Free Kicks: When a player plays in a dangerous manner, impedes an opponent (without playing the ball), prevents the goalkeeper from releasing the ball with her hands or commits any offence for which play is stopped to caution or eject a player. In Saturday divisions, heading or attempting to head is an offence restarted with an indirect free kick.

Red Card / Ejection: The offending player must leave match and facility. The offending team plays down for two minutes unless scored upon before the two-minute penalty expires. The offending player serves a minimum one-match suspension. Any player that earns two red cards during a league session will be suspended for the remainder of the session, including playoffs.

Second Penalty Spot: 30 feet from the center of the goal

Penalty Spot: 20 feet from the center of the goal

Advantage: Advantage will be applied in futsal, with penal fouls still counting as accumulated fouls. If the referee shouts, "play on" and gestures with both arms, the foul was a penal foul and will be counted accordingly. If the gesture is with one arm, the free kick would have been indirect and thus does not count toward the total.

Must wear a different color shirt. She may wear long pants and/or other padding as deemed safe by the match referee.

May slide in his own penalty area but only when playing the ball.

May receive a kick-in directly.

May kick the ball directly over the half-way line.

May score directly with his feet during the run of play.

May not possess the ball for more than four seconds in her own half.

May punt or drop kick the ball.

In U11 (2010) and younger divisions , goalkeepers may touch/receive the ball more than once per team possession.
​

No player is eligible unless formally on the team's roster, which must be presented to a match official prior to kickoff. Only 10 players may attend per team per game.

Coach players must be on the roster.

Sibling teams may not swing a maximum of three players from their sibling roster per game.

Only futsal balls may be used inside the facilities.

Soccer balls, w'heelies and soccer cleats are not permitted inside facilities.

U12 (2009) and younger leagues will use size 3 ball; U13 (2008) and older leagues will use a size 4 ball. In some cases match balls will be provided by the league; however, in the event a match ball is not provided, the home team is required to provide a match quality futsal ball.

Teams are expected to arrive 10 minutes before kickoff and check in with the site admin.

Teams are responsible for providing their own medical supplies, including ice.

In the event two teams are wearing the same color, the home team must change colors and must do this before kickoff. If your team doesn't have a change strip, please be sure you have pinnies.

Head coaches are responsible for controlling the conduct of their assistants, managers and players.

Spectators are not permitted. 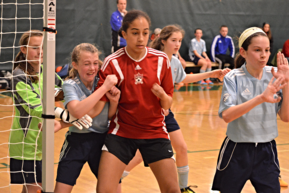 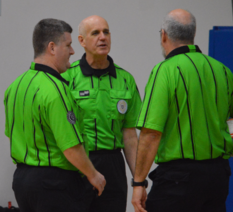