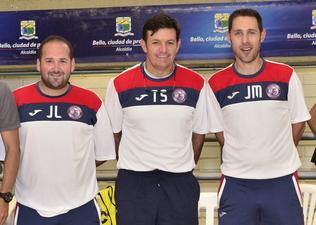 When the U.S. Youth Futsal National Teams traveled to Medellín, Colombia this summer, it was well represented by the Massachusetts Futsal Association. Director of Futsal Jason Miller of Sudbury, Academy Director Soorena Farboodmanesh of Wellesley and North Director Jeff Lamy of Lowell all served as head coaches, combining for an aggregate 8-1-0 record on the trip.

"I have had the privilege of working with Jason, Jeff and Soorena both administratively and
competitively, most recently in Colombia," said Ty Stauffer, U.S. Youth Futsal's Director of Coaching. "Their professionalism, knowledge of futsal and character as people make them a huge asset to the futsal community both locally and nationally."

The United States sent its U14, U16 and
U18 boys teams and U13, U14 and U16 girls
teams to Medellín, with each team playing
three friendly matches. Farboodmanesh led
the U14 boys, while Lamy guided the U14
girls and Miller the U16 girls.

"As a coach you dream about the opportunity
to work with the highest level of players and
coaches," said Lamy, head coach at Mill City FC.
"For me it was a dream come true to be able to
represent the USA internationally. The futsal
was very competitive and exciting to to be a
part of. Off the court we had numerous opportunities to experience and immerse ourselves in the Colombian culture."

"Having the opportunity to learn from the Colombian
men's national team coach and the other outstanding
professional and youth futsal coaches in Medellín was
incredible," said Farboodmanesh, who also coaches
the Netripper Futsal Club U13 and U14 boys. "I learned
so much in Colombia and am really looking forward to
getting onto the pitch with the Massachusetts Futsal
and Netripper players this winter."

"Now, not only can players travel around the country for futsal tournaments and identification camps," explained Miller, who has helped four Pink Ladies players make the U.S. Youth Futsal national teams. "But they have the chance to play internationally for their country. The sport has come a long way, and we are thrilled here in Massachusetts to be at the fore of it."

Lamy added: "Knowing there is a clear path to the youth national teams has given players hope, excitement, and the passion to continue working on their skills year round, and not just use futsal as a training tool for outdoor soccer."

All together, the three Massachusetts coaches hold a 15-2-1 record in international competition. 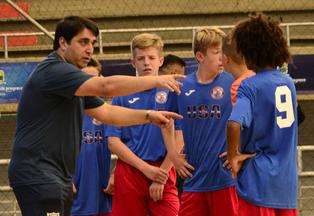