"We are thrilled that Coach Tozer will be back in town this winter," said Jason Miller, Massachusetts Futsal Association's Director of Futsal. "There is no person in the country who teaches the sport of futsal to players and coaches as well as he does."

Tozer will present an intensive, two-day coaching course on Feb. 8 and 9 at
The Mill Works in Westford, Mass. It will be the third Level 3 course hosted
in Massachusetts and the first since 2014. A FIFA Futsal Instructor, Tozer
has additionally led coaching classes in Boston in 2010 and 2013.

"I am extremely excited about returning to Boston in February to collaborate
with Massachusetts Futsal," Tozer said. "Many of the players as well as the
staff coaches for our U.S. Youth Futsal International Teams are identified
[there]."

The course will be immediately followed by the Massachusetts State Futsal
I.D. Trials on Feb. 9, 10 and 11, also at The Mill Works.

"There is tremendous interest in the Futsal I.D. program," said Director of Coaching Jeff Lamy. "With six players from Massachusetts selected for national teams this past summer, we are seeing not only an increase in the quantity of players but an improvement in the quality of players."

The U.S. Youth Futsal I.D. program is designed to identify and develop elite players in the most challenging and competitive environment possible. Top players advance to a national pool and the very best are selected for youth national teams, which compete internationally.

Regarding the Trials, Tozer noted: "The training sessions, facility, games, quality of the staff coaches and the players is simply fantastic and is an opportunity of a lifetime for all involved!"

Additionally, the Massachusetts Futsal Association will host a five-session youth futsal coaching course on the following dates: Nov. 30, Dec. 14, Jan. 4, Jan. 18 and Feb. 1. This course is specially designed for youth futsal coaches and will be led by members of the U.S. Youth Futsal National Coaching Staff.

Coaches and players can register for the courses and I.D. Trials on the Massachusetts Futsal Association web site, futsalma.com. 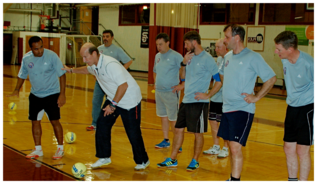